Few restaurant chains are worthy of a bar review, but when it comes to Trader Vic’s, the Chicago Bar Project will gladly make an exception. Trader Vic’s comes with a 75+ year history that includes over a half century in the Windy City, introducing the world to the Tiki bar, and inventing the Mai Tai. So, what if Chicagoans spend half the year bundled up as North Face billboards? At Trader Vic’s the forecast is always 70° with a chance of cocktails.

In 1934, Victor Bergeron opened his first bar, Hinky Dinks, in Oakland. Two years later, after an extended tropical vacation, Victor adopted the nickname “Trader Vic,” changed the name of his bar, and the rest is history. That history includes long ties to Chicago. From 1957-2005, Trader Vic’s was a mainstay in the Palmer House hotel, before it was unceremoniously booted when the hotel changed hands. Local use of cocktail umbrellas plummeted until Vic’s found its new home at the base of the 52-story Newberry Plaza in the Gold Coast, replacing the somewhat mysterious, jungle-themed Grotto. You’ll easily spot Trader Vic’s distinctive orange signage, just off the famed Rush Street strip directly behind Gibson’s and Hugo’s Frog Bar, but it takes a bit of work to actually get inside. First, go up a short staircase and then cross a service drive, go through a revolving door and head left through the building’s lobby before finding a pair of over-sized doors that giveaway Vic’s hideaway location. Inside, the oft-copied Polynesian/Tiki bar décor will look familiar, and ageless, even if you’ve never been to one of Vic’s 20-something worldwide locations. Miscellaneous novelties, from fishing nets and tribal masks to full-size canoes, adorn walls paneled in exotic woods and grass matting. Furnishings feature more wicker and rattan than a Pier 1 Imports. Lighting is soft and the mood is warm, literally—during the winter, the spacious room is kept at toasty short-sleeve temperatures. Enter into the foyer, where you’ll find the hostess stand and bathrooms. Then it’s up a short flight of stairs to the roomy bar/cocktail lounge, where a wall of windows gives a view of the building’s lush atrium. The long service bar provides plenty of seating, with room for over 20, but small groups will also find an array of chairs and loveseats where they can make themselves comfortable. Beyond the bar lies a formal dining room that has the look of a sub-tropical private supper club. 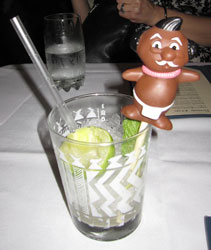 Trader Vic’s isn’t just part of the “cocktail culture,” it helped launch it. The inventor of the Mai Tai, which is Tahitian for “the very best,” also crafts dozens of tropical drinks, many of which are made using carefully guarded recipes. You can debate whether the Scorpion, Zombie and Hurricane are the exact same drink served under different names, but there’s no denying that the best kind of punch that can hit your lips is a Planter’s. The over three-dozen signature drinks are generous in size, delicious and potent, so maintaining proper pacing is crucial. The drinks may go down as easy as a glass of Hi-C, but if you’re not careful, so will you. Individual cocktails run $8-$12, but the best value is found in the over-sized punchbowls, which hold the equivalent of four drinks for around $20. Communal drinking may raise hygiene concerns for some, but I’m pretty sure the alcohol content in these drinks creates a natural sterilizing process. A full bar, a handful of beers and several wines by the glass are also available, but do you really want to go there? 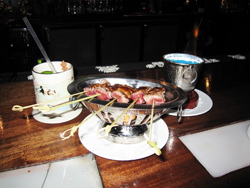 Food at Trader Vic’s is pan-Asian/California style centered on a wood-burning Chinese oven, kind of like the original rotisserie, that’s found in every Vic’s restaurant. They have a loyal dinner following, however yours truly has never advanced past the maki rolls on the appetizer menu. I can tell you that there are plenty of fish, fowl and meat options to choose from with entrée prices that approach those of fine dining restaurants, running from the mid-$20s to over $30, and a good portion of the diners likely remember watching the original Hawaii 5-O on network TV.

With restaurant hours, after-work is the height of Vic’s social scene. Here you’ll find assorted Gold Coast locals, travelers and shoppers drawn by the familiar name, solitary businessmen, and office parties. Vic’s has also been designated a cougar sanctuary by the World Wildlife Fund. The area in general is trendy, so it’s unlikely you can feel over-dressed here, but the Island attitude keeps things more relaxed and less desperate than some nearby watering holes. Trader Vic’s is open 4-10pm Monday-Thursday, 4-11pm Friday, noon-11pm Saturday, and noon-10pm Sunday.

For delicious, decadent, out of this hemisphere cocktails that taste like a liquid vacation, Trader Vic’s is 1st class all the way. If you like Trader Vic’s, you might want to make a special trip to the one-of-a-kind Hala Kahiki in River Grove, but bring a designated driver. For more information, check out Trader Vic’s Chicago website. Aloha.