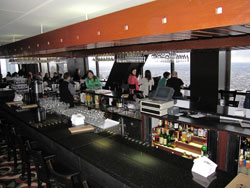 The Signature Lounge is one of the highest bars in the world, located on the 96th floor of the John Hancock Center and one story above the posh Signature Room restaurant. Both offer stunning views of downtown, Lake Michigan and visibility up to 60 miles, spanning four states on a clear day. It is also Chicago’s most well-known double entendre, and one of the city’s most unique venues for a cocktail.

The Hancock building takes up most of the block between Michigan Avenue (west), Chestnut Street (south), Delaware Place (north), and Mies Van Der Rohe Way (east). Access to what some locals lewdly call, “The Top of the ‘Cock,” is found just inside the Chestnut Street entrance, behind a velvet rope. The high-speed elevator takes about 40 seconds to ascend 1,000 feet at a rate of 25 feet per second, making your ears pop. The elevator stops at both restaurant level (95th floor) and lounge level (96th). You can also ascend a set of stairs from the restaurant to the lounge. The Signature Room restaurant takes up the eastern half of the building with its two-story dining room that looks mostly out over the Lake and the Loop, the latter of which makes seating at the southern windows the most sought after, particularly for the nightly fireworks display at Navy Pier in summer. 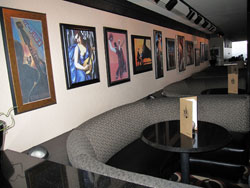 While the restaurant is formal, there is no dress code for the lounge. All are welcome, ranging from tourists in t-shirts to wedding receptions. Aside from early in the week or during inclement weather, expect a long line to form behind another velvet rope leading into the lounge. People here are waiting for a seat at the low-slung, closely spaced, padded chairs that offer a southerly view of the Loop. Savvy locals bypass the line, stroll down the funky carpeted hallway and grab a high-backed stool at the square island bar or a seat at the cocktail windows that offer an impressive view of the West Side, particularly at night when streetlights illuminate “The Grid.” The closest you’ll come to this view otherwise is when you’re flying into O’Hare from out over the Lake. At the bar, a small selection of domestic and imported beers run $8 and cocktails $13. Signature Lounge features 24 “signature” martinis, ten champagnes and a nice selection of cognacs, single malt Scotch and armognacs. Cheapskates beware: there is a one-drink minimum and a bottled water costs $6. If you’re feeling a bit peckish, the lounge menu offers a handful of appetizers, mostly of the fried variety. For anyone bristling at the prices, a drink here is still cheaper than observatory tickets ($15 per adult), whose windy, open-air view is obstructed by wire lattice and is located two floors below the lounge. As an added bonus for the fairer sex, the ladies’ room at the Signature Lounge also offers a smashing view of the Loop, while the mens’ offers nothing.

“The hushed, classic elegance of the leather-seated banquettes and green velvet mahogany trimmed chairs tames the rowdiest of revelers. The city skyline’s tiny lights shimmer and the stars in the inky sky glimmer above, while the ghosts of screen stars like Jean Harlow and Clark Gable haunt from black and white movie stills lining the walls. Deco murals of the L and street scenes seem to undulate to the steady groove of bossa nova tunes on the sound system, while the diagonal lines of the familiar Hancock x-pattern trusses frame the plate-glass expanse of the room.” The Signature Lounge opened in July 1993 by former staff members, Rick Roman and Nick Pyknis who formed the Infusion Management Group, replacing the jacket-required predecessor “Images,” formerly run by Davre’s, the public restaurant division of ARA Services of Philadelphia. The space originally opened as the “Sybaris Lounge,” not to be confused with those cheesy motel pool suites of the same name. This was back in August 1970, a year after Skidmore, Owings & Merrill constructed their masterful creation with its signature, diagonal beams that form the structure’s windbracing and allowed this 100-floor structure to be built for the cost of a 40-story building. For you history buffs, “Sybaris” was the name of a wealthy Greek colony in Italy, between the Sybaris (Coscile) and Crathis (Crati) Rivers, whose residents referred to as “Sybarites” became synonymous with pleasure and luxury. At around 1,000 feet, the Signature Lounge is one of the highest bars in the world, but has been outdone recently by “Bar” in the Shanghai World Financial Center and Cloud 9 in the Jin Mao Building, also in Shanghai. If you suffer from vertigo, take care: you can feel the Hancock Building swaying on a windy day and I was once with a Swedish woman who had to return to street level because she felt “seasick.” On a busy weekend nights, the lounge can handle up to 2,300 guests, while the dining room serves up to 550, and the private rooms add up to 200.

As for the double-meaning, do you get it yet? Think of the Declaration of Independence… While many have complained about being over-crowded tourist trap with hit-or-miss service and 70s décor, I happen to love the Signature Lounge and always try to drop in when visitors come to town. The views are incredible, especially at night, and the elevator ride is always a kick. So grab a drink after work, before a night out in the Gold Coast or a nightcap before heading back to your hotel. For more information, check out the Signature Room & Lounge website. Gan bei!

As we moved out of the farmlands into the grid
The plan of a city was all that you saw
And all of these people sitting totally still
As the ground raced beneath them, thirty-thousand feet down”