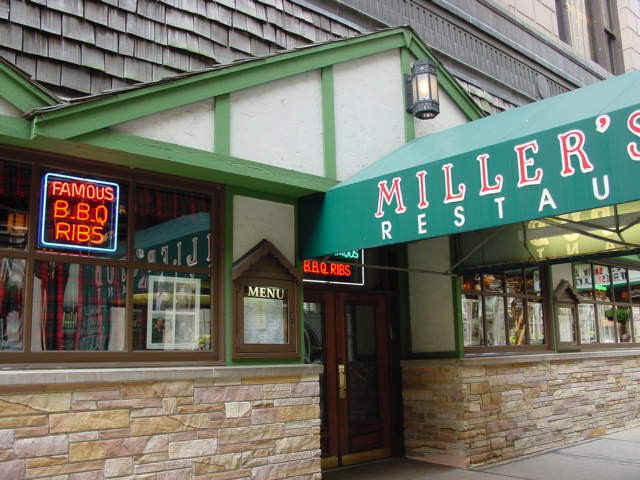 For visitors, daytime Loop dwellers and Chicagoans alike, Miller’s Pub is easily one of the best downtown bars for lunch, drinks after work or the theatre, and for celebrities of either local, regional or national status. Combine that with a long history, comfortable vibe, popular reputation, some of the best ribs in town, and being one of the only late-night bars (and kitchens) in the Loop, and you’ve got a winner. Hey, Sinatra ate here and Bill Veeck called it home. What more do you want?

Miller’s Pub (not to be confused with Pete Miller’s in Evanston) is located on Wabash Avenue between Monroe and Adams in the Loop, one block north of kindred spirit, the Exchequer Pub, and steps away from the parking garage that was once Big Downtown. From directly in front of it, Miller’s Pub looks like a place you might find in the English countryside with its stone encrusted façade, paned glass windows with multiple “Famous BBQ ribs” signs hanging in them, shingled roof, and old-fashioned lanterns. However, combined with the bright green “Miller’s Pub” sign and specials advertised below it, a green awning that stretches from the door to the street, the dozen floors of office space and the El looming above it, and the StreetWise vendors relentlessly promoting their publication, one quickly comes back to reality as you step away from it. Step through the doors made of wood and glass, through the green stone-tiled and stained glass entryway and you’ll enter this noisy, hall-like pub where there’s always a lot of hustle and bustle every afternoon and evening. If you can get past the throng of patrons waiting for a table, you’ll find a wooden counter-like maitre’d stand in front of you with a coat rack for your jacket, under the wooden statue of a welcoming chef. Inevitably, there will be a wait so they’ll give you a give you a buzzer so have a seat by the tartan curtains hanging from a brass railing in front of the windows overlooking Wabash or, better yet, head to the bar. Don’t worry, you probably shant wait long and it will be worth your while anyway. Reservations are accepted if you call ahead.

The long wooden bar can be found running along the north wall at Miller’s Pub, with plenty of flat-topped, green-padded wooden barstools for your kiester. Behind the bar, you’ll find several framed, Cosmo Kramer-like paintings of hobos hanging below a shelf that holds a plethora of ceramic steins and amongst a few neon beer signs and a rather large stuffed fish. Signs and steins – beautiful. At the east end of the bar, you’ll find an area still labeled “Bill Veeck’s Corner.” Here, Chicago sports legend Bill Veeck – the man who put ivy on the walls at Wrigley Field, instituted fireworks and outfield showers at Comiskey Park, and sent midget Eddie Gaedel to the plate – once held court and is still honored even though he passed away in 1986. Miller’s Pub features an uninspired selection of 19 bottled beers and eight on tap, but you can have draft beer in either a pint or a STEIN – now that’s hard to beat. A good selection of single malt Scotch is also available.

“Miller’s is a proletariat Pump Room, the sort of place where “friends” are called “pals.” Though there is no Booth One, there is an icon-laden corner where Bill Veeck used to hold court. Veeck, who would not have been allowed in the Pump Room because he never wore a tie, made Miller’s his home- away-from-home and Gallios has honored Veeck’s patronage and, more dearly his friendship, with the corner shrine.”

Photographs and publicity shots of athletes, local celebrities and politicians, military figures, and national performers coming through the Windy City festoon the walls behind the bar, on the wrap-around wooden paneling throughout the pub, and upon thick wooden columns supporting the two-story drop ceiling. Such personalities include: Frank Sinatra, Milton Berle, George Burns, Regis Philbin, Sammy Sosa, Mark McGwire, Dom DeLuise, Phyllis Diller, Doc Severenson, Marilou Henner (from Taxi), Larry Sturch (from F. Troop), and The Sarge (Gary Matthews, former Cub). Many of the photos were taken with Jimmy Gallios, current co-owner of Miller’s Pub whose family has run the place since 1948 when it was purchased from Irish immigrants. While not exactly a sports bar, Miller’s Pub does have several televisions around the room and within the bar area, but they’re kept silent to preserve a somewhat more sophisticated atmosphere than your average Wrigleyville or Bridgeport joint.

Green carpet runs through the dining room, which takes up the entire first level surrounding the bar area and host stand. Here you can gaze at the classical-like paintings that adorn the walls as select from the menu loaded with steaks and chops, Greek and Italian dishes, seafood, salads, sandwiches, and omelettes, all of which is served in ample portions. Other specialties include the “world famous” Canadian baby-back barbecue ribs for $15.50, the Diamond Jim Brady Cut prime rib of beef for $17.95, fried calamari described as “the best in town, hands down,” by Alexander Stacey writing for Centerstage Chicago, and the ever-pleasant free bread basket to start you off right. The food isn’t cheap, with luncheon specials running about $8 and dinner about $22 according to the 2002 edition of Zagat’s restaurant survey, but is actually reasonably priced given what you’d pay anywhere else in the area (even at delis and fast food dives). Zagat’s went on to rate Miller’s Pub as a solid “good” overall, where “‘Old Chicago’ lives at this American rib authority.” Miller’s Pub was also named one of the top five places for ribs in the city, according to my rib aficionado friend, along with Joe’s Be-Bop Cafe, Twin Anchors and Brother Jimmy’s (when it was still around). The service at Miller’s is swift, accurate, and no-nonsense. Combine that with the quality of food and a bill that won’t give you sticker shock, and you’re sure to enjoy an experience that has often been praised and rarely disappointing. Interestingly enough, you might notice that the stained glass in the entryway has “Wabash Inn” painted upon it, just under the mounted deer head and interior shingles, apparently a holdover from days gone by… Additional seating can be found in the second floor seating section, just beyond a railing of stained glass and amongst wooden tables and French posters advertising alcohol.

“I just realized that Miller’s Pub has always been my first stop during my past 11 visits to Chicago. I am literally there within one hour of check-in at the hotel.”

“After an exhausting day at McCormick Place (I was staying at the Palmer House) with no energy to go searching, I wandered into Miller’s Pub next door to the hotel. What a great surprise! Nice atmosphere, generous drinks, great food, conscientious service and a terrific value!! I went to Lawry’s the next night but I should just have come back to Miller’s. The prime rib beat out Lawry’s at half the price! Miller’s is a find!”

The crowd at Miller’s Pub is one of the more boisterous that can be found in the Loop, and the crowd doesn’t usually disperse by 8:00 p.m. like other bars in the area. Instead, businessmen, celebrities, conventioneers, and politicians alike can be found schmoozing at the bar or in one of the booths until the place closes at 4:00am (5:00am on Saturdays), making it the only late-night bar in the area (along with the South Loop Club). Miller’s Pub even keeps the kitchen open until 1:00am. While it wouldn’t be the place you’d take your significant other for a romantic rendezvous, Miller’s Pub is great for cocktails after work, celebratory dinners, business lunches, before Bears games, hosting club meetings, visits from your parental units, following Chicago Symphony Orchestra concerts, for pre- or post-theatre libations, after Art Institute Museum pilgrimages and University Club of Chicago gatherings (yeah right), or simply for a meal with friends.

“Old-time pubstaurant with tacky artwork and bad carpets has seen Loop action plummet then trampoline back up. Back-slapping clientele and crusty waitresses.”

While it isn’t the cheapest or as polished as its upscale brethren located just a bit further, north of the river, Miller’s Pub is easily one of the best and most reliable watering holes and chophouses downtown, and is highly conducive for good conversation over dinner and/or drinks. The steaks are good, the ribs are great (even if they’re Canadian), and you’re bound to leave satisfied. Specifically, Miller’s pub joins the Exchequer Pub, the Italian Village and Berghoff as one of the best spots for lunch in all of downtown, and night owls will also appreciate that both the kitchen and pub are open late, making Miller’s Pub the closest thing to a neighborhood bar in the Loop. And if you’re visiting, grab a t-shirt at the merchandise counter on your way out and savor the memory. For more information, check out the java-intense Miller’s Pub website or dial (312) M-I-L-L-E-R-S. Atta boy, Jimmy.

“Where the elite from sports and theatre meet”