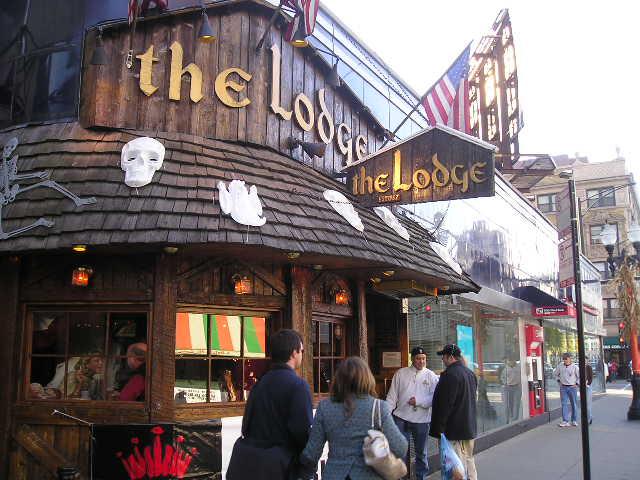 Photo courtesy of A.S. V.
The Lodge Tavern, having opened in 1957, is the oldest and one of the most notorious denizens of the crowded Rush & Division nightlife district in Chicago’s Gold Coast. “The Lodge,” as it is more commonly known, is one of the smallest holdings of the Lodge Management Group, which includes the Hangge Uppe, Slow Down! Life’s Too Short, Pippin’s Tavern, Streeter’s Tavern, Coconutz, Mother’s, Mother’s Too, She-nannigans House of Beer, River Shannon, and Downtown Dogs. Of these, the Lodge Tavern is like a combination of Huettenbar and former Bootleggers, making it one of the city’s most popular 4:00am bars particularly with conventioneers, tourists and suburbanites – though even city night owls get sucked in…

The infamous themed bar is located across the alley from Hopsmith Tavern, and across Division Street from Butch McGuire’s. The façade of the Lodge is notable for its wooden logs, plant life hanging from its shingled roof, and “The Lodge” scripted in Olde English-style lettering. What I find more interesting is that the tavern is an enclave within a steel and glass structure surrounding it, creating an interesting juxtaposition.

Upon entering the Lodge, have your ID ready as they card just about everyone. While the Lodge extends a warm welcome to all patrons, no matter how drunk or sober, don’t get on their bad side. If you do, they’ll blacklist you from the place, and you may have a hard time getting into all the other establishments owned by the Lodge Management Group as well. Assuming you haven’t been blacklisted, belly up to the long, ornately carved Dutch oak bar with shingled overhang that extends along the right side of the room. As you’re waiting for your drink, grab yourself a complimentary bowl of Winchester brand peanuts, and try to stay out of the way of the waitresses who bounce back and forth between patrons and the bar. The waitresses are so attentive that one would think that they earn a commission on every drink served in the place, especially when they scold you for going up to the bar yourself. There is also a bouncer stationed at the side alley entrance to the Lodge, which leads to a small bar and narrow hallway in the back of the tavern. On a recent visit, this area appeared closed, so I am not sure if the Lodge has combined all alcohol dispensing into the main room. Patrons at the Lodge are mainly conventioneers, tourists, suburbanites, and hardcore city folk that head there for late-night. The Lodge occasionally attracts a few local celebrities as well, including athletes like Mark Grace and Brian McRae who a friend of mine saw once when they were both with the Cubs. I myself do not recall ever having been to the Lodge before 2:00am, which made it somewhat difficult to write about the it, as I have a hard time remembering all that has happened to me there and the notes I had written were even more illegible than usual. However, what I do recall having witnessed on every occasion is the same: everyone is hammered and ages range from 21 to 65. I have often seen drunk geezers in suits (and sometimes tuxedos) swing-dancing with, what I presume to be, their wives in the smallish open area at the end of the bar (in front of the Golden Tee), to the songs of Frank Sinatra and other rat pack performers on the vintage Wurlitzer jukebox. It’s quite a site to behold amidst the old paintings of Civil War heroes and aging chandeliers in the amber glow. Younger patrons seem to gravitate towards the few windows at the front of the bar to keep an eye on incoming talent and debauchery out on the street, while they’re shucking peanut shells onto the beer-soaked floor. Photo courtesy of Paul Jahn
Similarly to all the other bars on Division, the Lodge is well-known as a pickup joint. Numerous friends of mine have picked up questionable individuals from the joint – a dubious achievement that I am happy not to share with them. On one occasion, my friend was cock-blocked by a waitress whom he had slept with when attempting to pick up yet another naïve lass. I suspect the owners and staff at the Lodge secretly revel in the resulting lurid reputation of the Lodge.

If you find yourself getting tired of the Lodge, I recommend heading over to the Hangge Uppe. The best way to get there is to turn right down the alley upon exiting the tavern, and turn left once you get to Elm Street. By going this way, Hangge Uppe‘s is only a block away. However, to some it may seem like an eternity if Mother Nature happens to call. Patrons often find themselves in this situation because they like to avoid the nasty bathrooms at the Lodge that look like they haven’t been cleaned since the bar opened almost 50 years ago. That is not entirely the Lodge’s fault, as patrons often zook in there or miss the pot. For guys: if you find yourself having to drain the vein, I strongly recommend that you do not pee in this alley. Two friends of mine have fallen prey to this on two separate occasions, and were ticketed $75 for it each by Chicago’s finest. Coincidentally, one of my other friends was the lookout each time – he is no longer given that responsibility.

Upon going to or from the Lodge, watch out for the traffic on Division. The area gets very congested with cabs and skittish suburbanite drivers. I have seen numerous near misses, so be careful. The police used to block off Division to traffic, alleviating the problem, but do not do it anymore for some unknown reason.

“With a charm that eludes us, this smallish place has been packing them in for more than three decades.”

“The Lodge has seen more than its share of changes over the years. When it opened in the late ’50s, the term ‘singles bar’ hadn’t even been invented. At that time it was called Suzy’s, a nightclub that featured jazz in the back room. The owner, Paul Risolia, changed the name to the Allegro and eventually to the Lodge. Its physical look, however, has remained essentially unchanged since 1962 when the bar underwent a major renovation and the familiar design-that of a Midwestern ski lodge-was introduced.”

– excerpt from “35-year-old Lodge Thanks Its Customers” by June Sawyers in the Chicago Tribune (February 21, 1992)

While the Lodge is not one of my favorite places, it is definitely worth a visit. Even I find myself there from time to time. While they no longer have the miniature bowling alley or free chili, there is always something interesting, and usually perverted, happening there – so if it’s a quiet pint you’re looking for, head over to nearby Dublin’s on State Street. One also gets a slight feeling of lechery in the air, which may have provided some of the inspiration for David Lynch and Mark Frost’s “Black Lodge” from the Twin Peaks TV series (watch out for Bob). Whatever the case, keep the Lodge in mind when you’re getting kicked out of other bars at 1:30 a.m. and it seems like a really good idea to stay out all night. For more information, check out the Lodge website. Swing, baby!

“Just read your review… two thumbs up! Just wanted to tell you that my brand new husband and I, and some of our bridal party, headed to the Lodge after our wedding this past June 7th, arriving, appropriately enough, at about 2:30 a.m. We’ve spent many a night ‘dancing’ to Frank & Bobby in the back corner, and love to belt out ‘Paradise…’ back there, too. One of our favorite things to do while there is watch all the married, bored, pushing 40, suburbanite women being charmed by conventioneers trying for that one night stand. Runner up: the bride-to-be, being whisked around town by her ever-faithful friends, doing the bump & grind with strangers while her little fake veil slides off her head.”