While I never had the pleasure of frequenting the Gaslight Club in Chicago’s River North district, I can appreciate its memory (hence, this page). The Gaslight Club, founded by Burton Browne, was private and required members to carry a key to get in, inspiring the rival Playboy Club that would open seven years later. As such, the joint attracted older, well-to-do men there to have an eyeful of girls dressed in a 20s version of the bunnies further north and to drink cocktails out of ceramic mugs just as they did during Prohibition. The Gaslight Club quickly outgrew its original location on Rush Street (kitty corner from Quigley Preparatory Seminary), then on Huron Street and finally moving to The Palmer House on Monroe. The Gaslight Club also spawned additional clubs in Beverly Hills, New York City, Washington DC, and Paris. They even had a roadshow that could be booked for events: “a leggy, lively revue of mirth and madness that features flappers, the Charleston, Dixieland jazz and spirited Mardi Gras fun,” as well as a publication called Gaslight Gazette, read by 75,000 men with an average age of 47.8 years and income of $28,779 a year (back in 1968, the year of their 15th anniversary).

Though now part of Chicago’s vibrant history, the legend lives on at the last surviving Gaslight Club (not to be confused with Gaslight Corner), located on the lobby level of the Hilton Hotel at O’Hare International Airport (across from Terminal 3).

“There’s a stately mansion on Huron Street, just steps away from Chicago’s “Magnificent Mile.” A neat cobblestone walk winds past the finely trimmed lawn and the softly glowing gaslights to the massive oaken door. It’s the Gaslight Club!”

“Cheerful music and swells of carefree laughter rush out the door with each key-holder’s entry… inside, a friendly smile and a warm welcome await you.

“Generous drinks, prime steaks and gourmet dinners are on the menu each evening, in the true Gaslight tradition. In the Longhorn and Gourmet Rooms, Claudette and Connie tend to every diner’s thirst, and the master chef in the kitchen takes care of the rest.”

– excerpt from, “The Gaslight is 15 Years Young”

“I returned from the military in ’54 and started back at Loyola night school that fall. The Gaslight Club was a going concern then and the first manager was Wally Killen. My brother-in-law (who formerly worked with Mr. Killen at another restaurant near 71st & Jeffrey) was one of three assistant managers. Because I was considered part of the “family,” I was given a key without a number stamped on it. Mine was stamped with a star, i.e. house complimentary account. A couple of other interesting tidbits (for what it’s worth): (1) the back bar on Rush Street was from the original Everleigh Club on south Dearborn Street (circa. 1900). I would assume it moved to Huron Street in the ’60s. (2) Several other items of memorabilia (statues, mirrors, etc.) were also from the Everleigh Club, especially the nude nymph on the back bar. (3) They did a fair luncheon business since Burton Browne’s advertising agency was just a couple blocks away on Michigan Avenue. At lunch, they had a “make-your-own sandwich” bar, where you were asked to pay 5 cents for each sandwich, because at the time Chicago had an ordinance that prohibited giving away any free food, hence the nickel charge. Its origin, obviously, had to do with buying votes at election time. Of course, the drinks cost about three times more than anywhere else, so they didn’t lose anything on the sandwiches. I don’t recall that there was any food service at night. The place was pretty small and even with the annex room, I’d guess couldn’t hold more than 50 people, including the bar. It was originally intended for the cadre in the advertising business to entertain clients in a more sophisticated atmosphere, but soon expanded beyond those limits. Hence, the move to the larger quarters on Huron Street. I was never in the Huron Street mansion because by then I was married, raising a family and was trying to forge ahead.

“As a young woman learning the ins/outs of finance, I was introduced to the original Gaslight Club and later became the second woman with a key, #W-2, which I still have today. While I would never take my male clients to Gaslight or Playboy, I took many friends and later as my highschool chums returned from Nam and even Korea took them to both places. I’d call ahead and, whether the Gaslight or the Playboy, the returning G.I.’s were treated like royally. Some very sweet stories come from those clubs. Burton died about 1968, I think. And don’t forget—Eddie Morton (Anrie’s brother) started a key club on the South Side, though I can’t recall the name.” 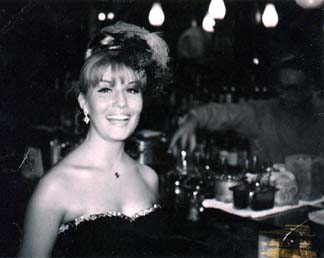 “This pic and the one on the previous page are the ONLY pics of me at the Gaslight Club, Chi. This was taken in ’66. I was taken there by Allen Mowbry, an English actor, who was the star of the moment at the Pheasant Run Theater commanded by Carl Stone. The man with the eyebrows hired me on the spot. He was the assistant manager to Don Ogawa, the manager of the Gaslight Club and Burton Browne’s houseboy. What a hoot!! I sang Summertime and laid them all away and I was working there the next night. “Mama Kerry” the costume mistress, an evil backstage entity, found me someone’s discard costume, spruced it up and, bada bing, bada boom, I was a Gaslight girl. “Bunnies” came later and just had to be pretty. The Gaslight girls were supposed to be professional singers and dancers. And if any one got fresh, their key was pulled forever!! I worked at the Gaslight and sang at the Playboy clubs (only 2 before quitting singing and marrying the Italian truck line owner), modeled for Shirley Hamilton, Playboy Models and Elite, etc. In general, worked my tush off.”

“Gaslight Club is the granddaddy of all the key clubs. You’ve got to have a key in order to get in the place, which bills itself as a private saloon. Once inside, find raucous gaslight-era entertainment in a huge, old mansion. Piano players or small combos are in all the rooms; a cowboy in the Last Chance Saloon engages customers in beating him to the draw; the Gaslight girls in the Speakeasy Room shimmy and Charleston; a main room lets you make your own nickel and dime sandwiches. All in all, far less blatantly commercial than Playboy and more fun. Hours are 4 PM to 3 AM Monday through Friday, Saturday to 4 AM, closed Sunday and all holidays.”

– Excerpt from I Love Chicago Guide by Marilyn J. Appleberg (1988)

“I worked at the Paris Gaslight Club from 1964-1966. I have so many stories you can’t believe it and so many good times. We only had five Gaslight Girls–sometimes six– and we were like a family. We counseled each other, stood in for each other and took care of each other because we were in a different country.

“We went out with the Rolling Stones one night after Caroline, who met them in London, had them come into the club for a drink. We had no idea what the fuss was all about and why people and photographers were following them and us when we went to a private club after hours.

“We would go down the street after we finished work at 3:00am to a club called the ‘Living Room’ where Art Simmons played piano. There we would run into Peter O’Toole and Omar Shariff who were in town filming Night of the Generals. Jazz musicians such as Duke Ellington frequented the club as well as stars like George C. Scott who gave Zulia a $100 tip–which was incredible at the time.

“Lise Larsen was my room mate. She was a beautiful redhead from Oslo. We had Patti, Zulia, Dorle and Caroline. Duncan Newton was the manager then-a Canadian. All of us sang and did the Charleston in the speakeasy when we worked that room. We had a Gaslight song we sang with a dance routine. There were beautiful Tiffany chandeliers then–real ones–and Burton Brown would visit and sometimes almost fall down the stairs due to drink!

“We didn’t make a lot of money but traveled and met fascinating people. We were treated at times like celebrities in France and had the best of wine and restaurants. We were taken to fashion shows at Dior and to dinner clubs. The French men joined the club to see American girls and hear songs from the roaring 20’s along with others.

“I eventually married a Gaslight member in March of 1967 when I moved to the Washington DC club in 1966. This of course meant I had to leave the club. We were not allowed to date members-but we sometimes took the chance.

“I have kept in touch with the bartender in Paris-Daniel Damon. I have also been back to Paris and had the pleasure of finding Stephan Guerrault (clarinet) and Christian Donadieu (piano) and Roger Paraboushi (drummer) who played in our speakeasy at the club as the Three Tigers.

“I hope you find this interesting as I have not found much at all on the Paris Gaslight.”

“I started working at the Chicago Club in 1960 and was one of the six girls selected to open the the Paris Club in November 1961. What an experience. We were flown to New York and sent to one of the top Hair Stylist at Antoines. We had a Colonel Archer as one of the managers and he had a nephew, Henry, in New York who took us out on the town. When I say us, myself and another girl Ann. As I look back, I can see myself as that 20 year old that was awed by it all. Ann and I had a great time and got in very late. The problem is that we were getting up very early to leave for Paris on a chartered flight with over 100 Gaslight members and all the brass, including Jean and Burton Brown. Let the fun begin. Ann and I oversleep. OMG, we are going to be a no show, for this big event. Well, we get to the airport and they are waiting for our arrival, so the flight can take off, late departure. We also ruined our fancy hair style as we slept and did not have time to fix it, except to pull it back in a pony tail or bun. Can’t remember. We actually had to get in our costumes and serve champagne on the flight, with a smile and we were exhausted. Operating on two hours sleep. Boy, I have not thought about that day for a long time. The friendly skies were a lot different in those days.

“I often wonder what happened to the original 6 gaslight girls who had an experience of a lifetime. Let see, there was myself, Geri F., my roommate, Ann S.. Also, Millie P., Mimi F., Robin ?, and a British girl Jan ? from the New York club.

“The Paris Gaslight was located at 41 Rue du Collissee. It opened at the height of the Twist with Chubby Checker’s Let’s Twist Again. I have a ton of stories just from the six months, living in Paris and working at the club. I actually worked for Burton for six years, leaving the Chicago Club in 1966. I was the first female assistant manager, managing the Last Chance Saloon along with Timo. I was a member of the Gaslight Road Shows, for at least 15 years. I was ‘Miss Gaslight.’ selected by the members out of the three clubs, New York, DC and Chicago. LuRae was runner up. They never ran another Miss Gaslight after that. mmmmmmmmmmmmm. LOL. The Gaslight was an extensive and wonderful chapter in my exciting life.”