The Gaslight Club situated in the O’Hare Hilton is the last of the original 20s-era speakeasies that inspired the old Playboy Clubs. The waitstaff consists of lovely and charming can-can girls dressed in corsets, tassels and fishnet stockings. The Gaslight Club’s extends beyond even that, attracting more of a transient business clientele with few regulars coming from the city or suburbs. Gaslight was open to key-holding members until 2001 and is now available to anyone wanting a cocktail, steak or seafood dinner, and live piano entertainment in a posh throwback setting. 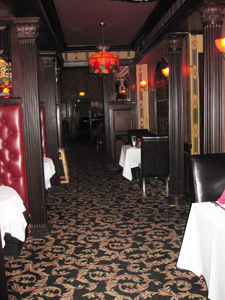 The O’Hare Hilton is situated across from Terminal Three, within the confines of O’Hare International Airport. Visitors either fly in, take the Blue Line “L” or park in the short-term lot. The Gaslight Club is located at the northwest end of the lobby, to the right of the front desk. Serbian owner Ranko (Ray) Dabizljevic leases the space from the Hilton and advertises the dress code as “business attire,” a rarity these days.

To the left of the framed Gaslight sign promising “Elegant Dining & Entertainment,” you’ll find the maitre’ d stand below a white statue of a woman that looks like she’s about to dive into water—perhaps your wallet instead… If you’re dining, the hostess will lead you to your table down a narrow carpeted aisle with Victorian wallpaper and illuminated by Tiffany lamps. A small room to your right features a handful of low-slung, four-seater tables, across from a series of tall, leather-upholstered wooden booths. Smaller, two-seater tables lie beneath faux bookcases along the eastern wall. Beyond the dining area is the heart & soul of the place, The Longhorn Room: a square, two-story space that is just large enough to accommodate the enormous crystal chandelier brought over from a castle in Europe. Several smallish, low-slung wooden tables fill this space, looked upon by large, ornately framed Rubenesque nudes and a photo of Jimmy Durante smiling broadly and surrounded by the original Gaslight Club girls. Nightly entertainment centers around the piano found halfway down the western wall. While Dixieland Jazz was once featured, you’ll find the typical piano bar cover songs instead like what you’d hear at Redhead Piano Bar, Zebra Lounge or Davenport’s. Perhaps it’s the gigantic chandelier overhead, but the piano looks a bit small, especially with the loosely piled stack of music books stacked upon it. A portal under the large “Longhorn Room” sign hanging on the eastern wall leads to the kitchen, beyond which is a small aisle for servers that is flanked by two elevated tables. The bar is found at the north end of the room with an impressive wooden back-bar framed by stately columns. The signature cocktail is the lemon drop. Rather than the shots you might have had at a place like the now-defunct Spike’s Rat Bar, this one comes in martini form, made with Limoncello and a lemon wedge. A fairly pedestrian beer list (no craft brews, thank you) has its counterpoint with a fine dessert selection of ports, cognacs, single malt whiskey, and a few other delectable spirits. Though once served in ceramic mugs, all drinks are now served in their customary glassware. The menu is definitely geared to those on an expense account. Signature steaks and chops run $34-49, the top end of which is the Gaslight Steak (prime bone-in rib chop), and surf & turf goes for $60+ (filet mignon and lobster tail)—all of which are served a la carte (expect $6 for a baked potato). For those wanting a step down in price, the Chicken Florentine and Wienerschnitzel are recommended. For dessert, the lemon mousse hits the spot quite nicely, though the chocolate mousse and Eli’s cheesecake are likely more popular.

Of course, dinner and drinks are served by friendly, slender, well-endowed, mostly Eastern European Gaslight Girls wearing low-cut tops, frills covering their backsides, fishnets or nylons, and high-heels—similar to a Playboy bunny outfit, minus the tail (after all, it was this outfit that inspired the bunny outfit). Water and bread (served on a cutting board) are dispensed by elegantly dressed busboys.

“Should be judged relative to what it is: a throwback to an old movie about the upscale past, perhaps a hundred years ago. Frankly I don’t know why it is not more popular than it is. Guests at the Airport Hilton mob into the sports bar, and a much smaller group gives this place a try. There is nothing unusual about that sports bar, but this place is far from usual. I often stay overnight at the O’Hare Hilton for a plane change (I am in KC), and I find the Gaslight Club to be a novel alternative to the usual—well worth its prices.

The first Gaslight Club opened on October 27, 1953 in Chicago’s Gold Coast neighborhood, by Burton Browne—a Colonel Sanders look-alike that sincerely felt he was a mountain lion in a former life. The original Gaslight Club was in such high demand, that it had to move to a larger space at 13 E. Huron (now a high-rise) that also featured the bar from the infamous Everleigh Club. A second Chicago location was added at the Palmer House (closed in 1988).

“[Gaslight Club] was started by Burt Browne, 55, president of Burton Browne Advertising ($5,000,000 a year in billings, mostly in electronics accounts), who declares he is ‘the only saloonkeeper in the country listed in Who’s Who, the Social Register and Dun & Bradstreet.’ In 1941, needing a place to entertain the ‘advertising manager from Seattle after feeding him a steak and three martinis,’ Browne converted a small office adjoining his agency into the Sundown Room, equipped it with a bar and attractive barmaid. Soon the Sundown Room became such a popular gathering place for Chicago hucksters that Browne could hardly get a drink in his own club. In 1953 Browne got 15 friends to invest $1,000 apiece in an expanded version of the Sundown, opened the Gaslight Club. He decorated it to resemble a fancy turn-of-the-century saloon in red velvet, covered the walls with paintings of nudes, supplied a ragtime piano player and free platters of cold cuts. The biggest attractions were beautiful waitresses in abbreviated versions of 1905 ball gowns. Mostly aspiring models and actresses, they earn up to $15,000 a year, are strictly supervised by Browne’s pretty wife, Jean.”

– excerpt from MODERN LIVING: Cash Under the Gaslight in Time (December 12, 1960)

Burton Browne, The Ace Of Clubs 1970 from Charles Lange on Vimeo.

Burton Browne, The Ace Of Clubs 1970 from Charles Lange.

In 1956, the New York Club opened in a plush old mansion and featured Elizabeth Taylor as a Gaslight Girl, while filming scenes there for Butterfield 8, for which she won and Academy Award. The Washington DC club opened in 1959 and then Paris in 1961. Gaslight Club O’Hare opened in 1973. After Burton Browne passed on, board member Robert Fredricks ran the clubs until 1984 when long-time Gaslight Club member Jim Roberts, Jr, took the reigns. At its height, the Gaslight Club boasted over 26,000 members, each with a gold-plated key. However, by the late 80s and early 90s, interest in members-only clubs significantly declined and both Gaslight and Playboy Clubs were closed with increasing frequency. Until a new Playboy Club opened up recently in Las Vegas, Gaslight Club O’Hare was the only one of its kind to survive.

My son Liam flirting with the waitresses, before heading behind the bar to fix himself a cocktail Today, the Gaslight Club is considered an oddity, cherished by those few who know about it and enjoyed on layovers. While either the location and/or cost of the entrees scares off most Chicagoans and suburbanites, the Gaslight Club is a one-of-a-kind original and definitely worth a visit. Just get to O’Hare an hour before you need to be there, resist the urge to wedge yourself into the tiny, nondescript bar near your gate, and have a drink at the Gaslight Club bar instead. Just make sure you don’t let the Gaslight Girls make you miss your flight… For more information, check out the Gaslight Club website. Capital!

I had a key to the Gaslight,’ Playboy founder Hugh Hefner said in a recent interview from his Los Angeles mansion. ‘And we ran an article [in 1959] on the Gaslight. It got a positive response from our readers wanting to know how they could become members. So a Playboy Club seemed like a charming idea with no notion with what it was going to lead to.’ Hef also expanded on the Gaslight Girl outfits, adding white tails and ears for his Playboy Club bunnies.”