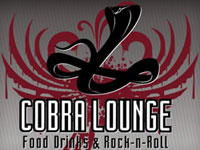 An oasis for punk, metal and ska fans, Cobra Lounge is, fittingly, an industrial-alternative night spot set along an industrial corridor with few drinking alternatives nearby (Betty’s Blue Star Loungebeing a notable exception). With an excellent selection of suds and spirits, nightly specials, free entertainment and some of the best damn tater tots around, Cobra Lounge is a bar with some bite.

This spot on the near west side was once home to a long-standing taproom called the G&Z Restaurant & Bar. In 2006, the space was completely upgraded, in both décor and clientele, when the Cobra Lounge moved in. Yet, fast-forward several years and the illuminated red and black serpent sign still remains as one of the few signs of life along a particularly gritty stretch of Ashland. Located a block north of Union Park, Cobra Lounge makes for a convenient refuge from thePitchfork Music Festival. For the other 362 days of the year— Cobra Lounge is open every day—though getting there takes some initiative. From the loop the green line to Ashland is an easy option. Cabs are also good for getting there, but finding one on the way out? Good luck. Street parking, however, is both ample and free. A 10 minute walk to the United Center, you can easily save $20-40 on parking and easily make it back to your car while everyone else is still sitting bumper-to-bumper in Lot H. And if you’re looking to spend that $20-40 on food and drink after an event, I know just the place. Diffuse rose-colored light bathes the rectangular main room, where the ceiling is made up of exposed joists from the floor above and the exposed brick walls are covered with over-sized mirrors, a smoking skeleton and a mounted Harley motorcycle. A long curved bar occupies the north side of the room with various seating options along the opposite wall. An opening in the southern wall leads to a larger auxiliary room. Here you’ll find a second bar, which is opened during busy periods, and an elevated stage at the far end. As a Lounge, the money saved on TVs—there are none—has been pumped into the sound system which cranks out and an aggressive soundtrack of punk pioneers and masters of metal, thankfully omitting the 80s hair bands that nearly ruined the genre. Throw a few bucks in the jukebox and you can create your own playlist. I’ve seen some complain that the setup isn’t grungy enough for their liking, but this isn’t a drawback in my book. The Cobra Lounge is going for a 21st century urban-alternative vibe and they nail it. Sixteen drafts and another 3-4 dozen beer selections await, with several craft beers offered by the can. Prices are fairly standard, but specials are offered daily, with the likes of $3 Guinness pints on Wednesdays and $3.50 Surly drafts on Tuesdays. An impressive whiskey selection augments the beer list, ranging from $3 Jameson and Maker’s Mark specials to very special scotches that can run upwards of $30 a glass. I have not experienced this first-hand, but I’ve heard that ordering martinis or specialty cocktails come with an added surcharge. So, my advice is to stick with a beer and a shot and you’ll be fine.

Food offerings are limited to a fairly standard, but competent selection of apps, salads and sandwiches. I can vouch for the half-pound Cobra burger, which for nine bucks comes with your choice of french fries, sweet potato fries or that delicacy from childhood, tater tots—super crunchy, super salty, but not too greasy monuments to spud technology. Half-price burger Mondays make for a good reason to eat out. The two sweetest words to Chicago bar-goers are possibly “cabaret license.” It means a bar can host live entertainment, but can’t charge a cover (see Mutiny and Gallery Cabaret). So Cobra Lounge’s eclectic mix of amusements never come at an added price. DJ-hosted theme nights are offset by regular live shows and other events that go well beyond the punk-metal motif. Sundays are devoted to Spanglish rock, while the third Thursday of the month features the James Brown tribute band, Get up with the Get Downs. You’ll also find various indie acts, bands from Cobra’s own record label and the monthly Flea Circus—a multi-media mix of arts, handcrafts, music and “tasteful” pornography. Despite its edgy aura, Cobra Lounge is a place where you can come as you are and be who you are. Though you can’t go wrong wearing black, stopping by in a Hawks or Bulls jersey won’t even garner you a second look. Service is friendly and the 20 to 40-something crowd is equally sociable, tolerant and likely sporting more tattoos than an episode of LA Ink.
With rocking tunes, wallet-friendly specials and atmosphere to burn Cobra Lounge deserves further investigation. If you like Cobra Lounge, slither on over to nearby
Bottom Lounge, Exit or Club Foot. For more information, check out the Cobra Lounge website. Oi!