As the inspiration for the tremendously popular TV show Cheers, the Bull & Finch Pub is one of the best known bars in America. For fans of Cheers, the Bull & Finch is a major tourist attraction where one can revel in their favorite TV sitcom by having a beer and purchasing a wide variety of tchotchkes with “Cheers” emblazoned on them. For beer lovers and bar aficionados, the Bull & Finch stands up as a great pub, even without its television legacy by having all the wood, bartender witticisms, Boston memorabilia, and Cheers merchandise that one could hope for. Cheers has since been taken off the air, but the Bull & Finch Pub continues to attract 500,000 tourists a year, while maintaining its notable, friendly neighborhood atmosphere.

The Bull & Finch Pub is located on the garden level of the Hampshire House Hotel. A yellow and black Cheers flag mounted on the hotel’s red brick exterior waves next to an American flag like a beacon for visitors and regulars alike. Cheers fans will instantly recognize the white stone facade with its three white awnings. For those less observant, or for those less familiar with the show, a Cheers sign is mounted on the black, wrought iron railing and the brick wall behind it, both with that golden logo and hand pointing to the Bull & Finch entrance. While the fictional “Cheers” has been around since 1895, the Bull & Finch has only been around since 1969. The Hampshire House was purchased in the Fall of 1968 by owners Kershaw and Veasy. The Hampshire House started life as a mansion owned by the Thayer family. Kershaw and Veasy’s original plan for the mansion was to turn the building into a “traveling businessman’s club,” but there was only enough money to build a pub (thank God for that). The two wanted to give this new bar an authentic English pub-like feel. So, when they weren’t able to ship an actual English pub back to the States piece by piece (none for sale, bastards!), they naturally hired a Canadian to design it instead (read: hmmm). All sarcasm aside, the owners hired W. Paul Hughes, whom had experience in designing pubs in Montreal for English breweries in much the same way Schlitz did so with Schuba’s and Southport Lanes in Chicago. Once the design for the Bull & Finch’s 750 square feet of space was completed, British craftsmen assembled the African Oak and stained Jacobean walnut bar, beams, drink rails, and spindles so that they could be reassembled once they reached Boston. Little wooden tables and chairs padded with tapestries completed the picture. Once the bar was reassembled, the former servants’ recreation room had never looked better.

The Bull & Finch became an inspiration to producers Jim Burrows, Glen and Les Charles in the early 1980’s. The three were scouting Bostonian watering holes to find the perfect place to base the concept of Cheers, and they not only found a place where everyone knows your name but also where the infamous bartender Eddie Doyle tends bar to this day. The producers were sold and Cheers debuted in September 1982. While the show was actually filmed in Paramount’s Studio 25, the last episode eleven years later hosted by Jay Leno, was filmed at the Bull & Finch.

Partly based on the success of Cheers, but mostly because of his quick-witted personality, Eddie Doyle has become one of the country’s most well known bartenders over the last 25 years. This Westwood, Mass native has created all of the Bull & Finch’s and Hampshire House’s graphic designs, has raised millions of dollars for local charities, and continues to espouse Bostonian sports and politics. For his efforts, September 12, 1999 was proclaimed “Eddie Doyle Day” by Mayor, Thomas “Mumbles” Menino. 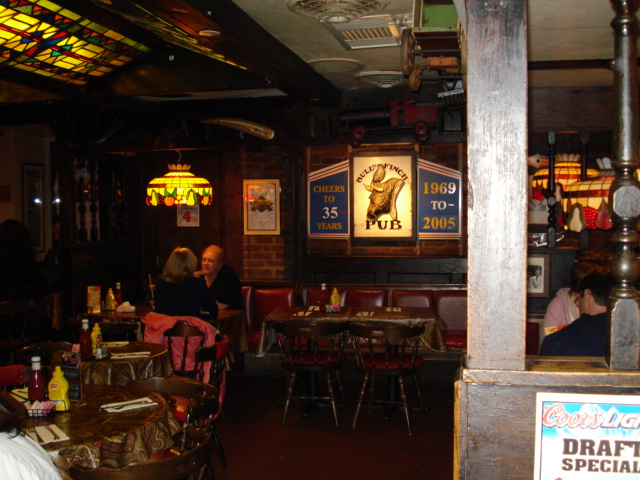 As you walk down the stairs leading to the Bull & Finch main entrance, be sure to hang on to the brass railing. Perhaps this is more important advice for when you are leaving, if you know what I mean. Following your descent you’ll arrive at a thick wooden door. When you pass through, have a few Norm-isms at the ready, perhaps, “It’s a dog-eat-dog world and I’m wearing Milkbone underwear.” Okay, no one will know your name, but the hostess will ask you where you’re from as you get carded. My suggestion: hang out at the bar and have a chat with Eddie and whomever else is sitting there. The bar itself is an exact replica of the bar from Cheers, but instead of being an island in the middle of a large room, the bar arcs out from the wall in a rather small room. The other “half” of the bar is in the back room, but there are only a few chairs there and mostly tables and booths. While gazing at the collection of police patches behind the front bar, you are likely to meet people from Britain, Europe and all over the world as well as from throughout this great land. Elsewhere in the front room hangs many pictures of Ted Danson, other Cheers stars, Boston sports heroes, and other things Bostonian.

Seating is also available along the side of the front room, in the backroom, and upstairs at the Library Grill (known as Melville’s Seafood in Cheers). I suggest that wherever you want to sit – tell them. On a recent visit, they tried to send me upstairs instead of sitting in the bar, which I would have none of. While the Library Grill is a wonderful wood-paneled restaurant with pictures of Herman Melville, Hawthorne, and other New England literary titans and upscale fare including sauteed beet greens and caramelized shallot salad, quahog chowder, prime sirloin, and herb-crusted lamb, your place is downstairs with other pubmongers. Have your picture taken by your server, or by the guy selling digital pictures for up to $10. The hallway leading to the backroom acts also as a small gift shop where you can buy glassware, shirts, books, etc. An additional, much larger gift ship is located upstairs but is often crowded so buy your stuff downstairs. To get upstairs, you will need to walk up a very narrow, spiraling stairwell that only accommodates one direction at a time. On my last visit, I broke down and bought a dimpled glass Cheers mug which is what they serve Sam Adams drafts in. The back room feels a little like an English Pub with wooden booths, a stained glass skylight and a few windows. Subway handles hang above the bar, just in case your barstool is not feeling as sturdy as it should.

The menu is filled with standard pub grub including fish & chips, nachos, chicken fingers, buffalo wings, chili, clam chowder, baked beans (surprise), pasta, and the most magnificent bleu cheese burger I have ever had. The Boston Cream Pie is also sensational. That and several pints of Sam Adams once caused me to pass out on a Boston Common park bench in the middle of the afternoon, which was strangely followed by a $50 cab ride to suburban Peabody (pronounced pee-b’dee).

While crowds have subsided since Cheers was on the air, patrons still come from “Tucson to Tasmania.” Located in the posh Beacon Hill neighborhood, just to the west of scenic Charles Street, a trip to the Bull & Finch can round out an excellent visit to Beantown that hopefully will also include Giacomo’s (a fantastic Italian restaurant), walking the Freedom Trail (tracing Paul Revere’s historic ride), Harvard Yard, shopping-epicenter Faneuil Hall, USS Constitution, Bunker Hill, and baseball mecca, Fenway Park. If you liked the Bull & Finch Pub, check out nearby Sevens Pub, as well as the pubs on Union Street, immediately north of Faneuil Hall, which include the Purple Shamrock, the Bell in Hand Pub (the oldest continuously operating pub in America), and the Union Oyster House (the oldest restaurant in America; often frequented by JFK). Getting to the Bull & Finch Pub can also be a trip if you take the “T” – Boston’s metropolitan rail. The “T” is the 5th oldest subway in the world behind London, Paris, Bucharest, and Rome. The closest T stop is “Park St.,” where the blue and red lines converge. For further information and “David Letterman’s Top 10 Reasons Why Cheers Went Off the Air,” check out the Bull & Finch website. Cheers! …and when you’re in Boston, try not to make an ass of yourself like I did…