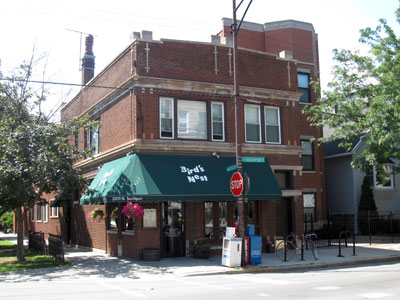 When it opened in October 1995, Bird’s Nest was an instant classic and has this Lincoln Park neighborhood bar has held up well ever since—and recently recognized as a Certified Purveyor of the Miller High Life. Why? Is it the laid-back atmosphere? Cheap drink specials daily and wings? Pool, Galaga and Golden Tee? Cover bands and open-mic? Yes, yes, yes, and yes.

Bird’s Nest is located at the northwest corner of Southport Avenue and Altgeld Street in the Sheffield Neighbors portion of Lincoln Park, around the corner from Faith & Whiskey to the east and McDunna’s to the west on Fullerton, and just south of another classic, Southport City Saloon. The Bird’s Nest sign humbly consists of white script on a forest green awning. Step through the door and you’ll find an old-school bar with the same layout as Toons, Schoolyard Tavern and Sheffield’s: a wooden bar runs the length of the northern wall, featuring comfortable high-backed wooden barstools with armrests. Wood paneled walls feature black & white photos of Chicago—a nice compliment to the bar’s wooden floor and gold-painted tin ceiling. In the front of the bar, near windows overlooking Southport is the pool table. Just beyond the electronic dartboard, Galaga and Golden Tee are the restrooms. Though it once supported Alabama games, Bird’s Nest is now a Nebraska bar, aside from which you’ll find NFL Sunday Ticket and the usual selection of Chicago sports on TV, followed by SportsCenter and movies occasionally played as I did see bits of Castaway there once… Additional entertainment is had from cover bands on weekends that lean towards the crunchy rock of Grateful Dead, Phish, Dave Matthews, and the like. Bands play in the surprisingly swanky backroom with a small stage and couches, which is where you’ll find Open Mic Zone every Monday night and the space is also rented out for private parties. Bird’s Nest features a pretty standard selection of pub grub: fried appetizers, salads, chili, burgers, sandwiches, wraps, $11 pizzas, and “award-winning wings.” Ok, they haven’t received too many accolades recently as competition has intensified, but many still love their BBQ, hot BBQ, teriyaki, hot teriyaki, and honey BBQ sauces, especially when they’re $0.35 each on Thursday nights and washed down with $7 pitchers. If you’re really hungry, be forewarned: Bird’s Nest gets knocked by many for slow service. As for the crowd, guys from the neighborhood love it, but the ladies are a little less than impressed… making it a good weekday option or starter bar on nights you’re looking for action.

While nothing fancy, Bird’s Nest stands out for being a pretty low-key, unpretentious crowd for Lincoln Park and a cool place to go during the week or on the weekend to catch up with friends. Bird’s Nest was opened almost 15 years ago by Matt “The Bird” Linder and his partner Mark Feitl, replacing a seldom-remembered joint called the Irish Anchor Club. The Official Chicago Bar Guide described Bird’s Nest as a “sporty neighborhood
bar” in 2001 and the description still holds up today. For more information, check out the Bird’s Nest website. And you’re next up on the pool table, chief.