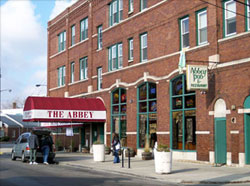 While the Abbey Pub tries hard to recreate the feel of an Irish pub, it misses the mark somewhat. Instead, the largest part of the Abbey seems more like a barn than a pub, or an abbey for that matter. However, a pint of Guinness never seems far away thanks to three large bars spread throughout the place. In addition, the Abbey Pub has become a premier venue, not only for traditional Irish music (as you may have guessed), but also for folk, bluegrass and country music. So, for those who enjoy traditional Irish food and music, Irish sport, as well as American music with traditional roots, the Abbey Pub is as stellar an establishment as it is large.

Because of its location at the corner of Grace Street and Elston Avenue, nestled in the Irving Park neighborhood near the Kennedy Expressway, the Abbey Pub is not the most convenient pub to get to for those elsewhere in the city. But, like nearby establishments Chief O’Neill’s and Mirabell, the Abbey Pub is worth the trek – just don’t expect to find a cab afterwards. For the North Side Irish that live nearby, the Abbey Pub is the epicenter of the neighborhood, and the bar is easily accessible to suburbanites coming in off the Kennedy (just get off at Irving Park Road and head south on Elston for two long blocks; for once, street parking is plentiful and there’s even a free lot nearby).

The Abbey Pub can easily be spotted with its white and green awning, shading part of the sidewalk café and extending all the way to the street. After you flash your ID to the bouncer, head to the pub-like barroom on your left, or present your ticket (or buy one) to the second bouncer and head through the door on your right to the barn-like former banquet hall where the bands play. There’s an ATM in there if you’re short on cash, and it actually works sometimes.

The pub area on the right, accessible through a battered wooden door that surprisingly blocks out even the loudest of bands across the hall, offers patrons a relaxed setting in which to enjoy a bit of craic, the likes of which has even lured George Wendt of “Cheers” fame to stop in from time to time to pound a Guinness or two. The beer-soaked, wooden L-shaped bar with its brass railing serves up a large selection of ales on tap – all of which help wash down selections from a menu that includes old Irish favorites like meat pies, fish & chips, Irish stew, bacon & cabbage (a.k.a corned beef and cabbage), Gaelic egg salad, and Irish breakfast served all day on Sunday. Normal American fare like nachos, cheese sticks, buffalo wings, salads, burgers, pizza, and barbeque ribs can also be had for the less adventurous. A fair amount of seating is available at the west end of the white, hexagonally tiled room at a series of low-slung tables in the middle of the room, as well as at booths around the perimeter. Fans hang from an ornate, black-painted tin ceiling. The restrooms are accessible down another narrow hallway located between the bar and the digital jukebox.

Known to locals as serving a decent pint o’ the black stuff, the Abbey recently won the award for serving Guinness at the best temperature (55ºF) by the Pint Police, featuring a, “Nice, slow technique by the Irish bartender.” However, according to the same people, “…because they don’t use proper Guinness mugs, our pint measured only 13 wimpy ounces.” Sounds like there’s room for improvement…

The pub area is the place to watch satellite broadcasts of English and Scottish Premier League Football (soccer), World Cup qualifying matches, and 6-Nations Rugby ($20 cover). Like at Ginger’s Ale House, Sedgwick’s, Globe Pub and Johnny O’Hagan’s, these games are played live – that’s before noon on weekends, and usually before 9:00am CST, chief. Good luck dragging your sorry ass there after a long Friday night! The Abbey also shows Irish sports like Gaelic football, hurling, camogie, and handball matches. Additional tables and chairs can be found opposite the bar so that your view of at least one of ten televisions or the 15-foot big screen hanging from the ceiling is unobstructed. Unfortunately, when European sport, Cubs or Fire games are not on, White Sox and Blackhawks games are. Framed photographs of all things Irish hang from exposed brick walls, to round out the décor. If you’re feeling even more mellow or in a quiet mood, head through the bar area to a smallish, wood-paneled room on the far west part of the building, known as the Lambay Island Dining Room. This area was named after a picturesque isle near Dublin.

Back through the bar and entryway is the party barn where the bands play. At the west end of the room is the first stop for most concert-going patrons. The wooden bar there with brass railings is an extension of the one found in the pub area. And, unlike other venues like the Park West, Joe’s and the Wild Hare, this bar is staffed by a small army of servers that make sure you get your pint within seconds. Once you have your drink in hand, you are faced with a difficult choice: where to go? You can grab one of the three booths along the south wall in front of the windows (good luck, they’re almost always taken). You can elbow your way through the masses to the stage adorned with faux brick. You can head up a staircase on either side of the room to sit at a table in the balcony (also adorned with faux brick) that overlooks the stage. You can hang out at the back bar and get bumped every few seconds. And, if that’s not enough choices for you, you can head to the second bar by the fireplace, along the north side of the room. My recommendation: second bar or balcony.

The Abbey Pub rivals Schuba’s, Hideout, Old Town School of Folk Music (stage), and Martyrs’ as one of the premier venues for live folk, bluegrass and country music on the weekends. At the Abbey, I once saw the acts, Devil in a Woodpile, Robbie Fulks and Split Lip Rayfield. Devil in a Woodpile put on a foot-stomping show, aided by the tuba bassist. Robbie Fulks, whom is very well known in Chicagoland for his folksy, country-tinged rock, seems to get increasingly sappy-country with every new show. However, Robbie still has excellent material about things like scrapple (no, not scrabble – a Pennsylvania dish that makes spam look like a delicacy) and the upbeat classic, “She took a lot of pills and died.” Split Lip Rayfield is a band that, “If these guys weren’t so nice we’d all be very afraid of them,” according to local label, Bloodshot Records. This tattooed band from Wichita, Kansas, plays in white t-shirts, folded baseball hats, and play a variety of instruments that include a standup bass guitar made out of a fiberglass sink and loose strings, and a mandolin played so fast that the guy’s hand was but a blur. Other bands that play at the Abbey include Neko Case, the Waco Brothers, and Kris Kristofferson even played there once. Tickets usually cost between $8 and $20. While I dislike country music outright (except for The Gambler by Kenny Rogers and The Devil Went Down to Georgia by the Charlie Daniels Band), all three bands were influenced not only by country, but also by rock, bluegrass and folk enough to make it very enjoyable. Just be forewarned: the place gets packed. Abbey Pub from above

In addition, the Abbey often features live traditional Irish Music. In fact, the Abbey Pub hosts the longest running weekly Irish jam session in the city, referred to as the “Irish Sessions,” every Sunday at 8pm with no cover charge (Cullen’s, eat your heart out). During the week, country & western barn dancing is held on Mondays ($5 cover – and you thought I was harsh calling the Abbey a party barn, didn’t you?). Folk music open-mic is hosted on Tuesdays and the rotating house band plays on Wednesdays. Thursday through Saturday usually features the type of concerts described above, but with the occasional addition of Irish and Celtic performers, locally and from around the world, including bands like: Altan, the Chieftans, Christie Moore, the Drovers, Solas, and the Clancy Brothers. And, like every other bar in Chicago with an Irish name, the Abbey gets packed with heaving crowds on St. Patrick’s Day, with a line of people stretching around the block waiting to get in.

The Abbey Pub can pack in about 700 people, which is a limit that is pushed on the weekends when cowboy boot-clad patrons pack the place, especially for shows hosted by Bloodshot Records. Many come from the city and suburbs alike, and get pretty rowdy (thanks to the music). Otherwise, it’s those living in the Irish neighborhood around the Abbey, mellow locals in the surrounding neighborhoods, or those Irish who have come directly from the Emerald Isle itself.

Since 1989, the Abbey Pub has literally been run by Looneys – owners Tom and Bridget Looney, that is, and they’ve done a fine job with the place. The crowds seem to grow bigger each year, which is impressive considering that the Abbey Pub has actually been around since 1973, the finest of years in the 1970s. Tom Looney, as the name implies, is a pretty interesting guy himself. I once had a few free pints of Guinness with him as a friend and I tried selling him on hiring an AIESEC trainee to work for either his pub or his side catering business (RSVP Catering). I also knew Tom’s daughter, when she was a member of Northern Illinois University’s Irish Student Union. Bridget is also a character. She once refused a couple of Irish lads from entering the bar to watch the football match between Dublin and Donegal without paying the cover. The pair just happened to be Bono & Edge of U2. They ponied up the money and were allowed access. Similarly, John Cusack was once denied access to the house phone. Bridget also told me that George Wendt came in one night, downed several pints while holding court up against a window in the party barn for hours, and then left without paying! What is it with these celebrities? Regarding George Wendt, he simply forgot and he called up the next day to offer his credit card details once he realized his transgression. The Looneys are good people and should be proud of their establishment, but don’t cross ’em!

Some consider the Abbey Pub one of the best Irish pubs in Chicago though, strictly as a pub, I feel the Abbey falls somewhat short of the top ten but is notable given its Irish food, music, sport, and overall atmosphere in the west rooms. While this may be a bit harsh, I would definitely rate the Abbey Pub in the top five as a folk, bluegrass and country music venue, if not #1. My recommendation: take in a show on the weekend and head to nearby Timber Lanes afterwards for candlelight bowling until 2:00am (bowling and the Abbey seem to go together). For more information, to purchase tickets for upcoming shows online, to join the mailing list, or to check out the sports viewing schedule, visit the Abbey Pub website. That’s grand!